148. IMPROVISATION AND COMPOSITION METHODS: SCALE OF CHORDS VERSUS CHORD-PROGRESSION


AN EXCELLENT SOFTWARE TOOL TO UNDERSTAND THE BASIC 3 CHORD REATIONS IS THE SOFTWARE NAVICHORD (FOR IOS). IT HAS A HEXAGONIC TOUCH-SCREEN KEYBORD OF THE NOTES WHERE THE CHORDS ARE TRIAGNGLES AND ARE PLAYED BY TOUCHING THE CENTER OFTHE TRIANGLE
SUCH HEXAGONIC KEYBOARDS HAVE BEEN PATENTED ALSO IN THE TERPSTRA KEYBOARD.    THE 3 BASIC LOCAL RELATIONS OF THE CHORDS (NO-COMMON NOTE OR CHROMATIC RELATION, ONE COMMON NOTE OR HARMONIC RELATION AND TWO COMMON  NOTES OR MELODIC RELATION) ARE IMMEDIATELY VISIBLE.
THE NAVICHORD IS  ALSO A CHORD LOOP SEQUENCER WHICH PRODUCES CHORD PROGRESSIONS AND BACKTRACKS.


In post 83 we mentioned that in musical practice a more general approach is taken that improvising within a single scale, which involves more than one scale and relevant modulations.  This is determined from the harmony rather than from the melody. We mentioned also the concept a set of chords as scale of chords rather than a particular chord progression, which is different in the same way that a scale differs from a melody in it.

For this end, we describe in post 83  the 3 wheels of chords, the chromatic, the one by intervals of 3rds and the one by intervals of 4ths, and 3 types of chord cycles from them, the short (3-chords), the middle (6-8 chords) and the full cycle (12-15 chords). In the wheel by 3rds there are 2 medium size sub-cycles (See below)    These subcycles of chords, for the chord progressions improvisation, play the roles that scales play for the solo improvisations!
(see also post 17 and post 32)

The most common scale of chords is a connected arc of chords in the wheel by 4ths. That is 3 or 4 or 5 or 6 chords , that each is a pure 4th (or pure 5th) away from the previous and it  is either major or minor chord. Two such successive chords have one end-note in common. This is the equivalent of  the traditional scale, and because the chords may turn from minor to major and vice versa, it is in fact a bundle of different scales with modulations between them. A simple way to improvise over such a "scale" of chords is to play the melody, go up and down according to the demands of the emotions, and then use the chords as areas around the main and more permanent notes of the melody (simplicial sub-melody or centers of the melody) , but putting these centers of the melody as middle notes usually (but not only) of the chords of the chord-scale. To be more certain for the good result we may alternate the melody with the chords, but use only chords of the predetermined scale of chords. (See also post 147 for combining melodic themes with chords).

One of the simplest scale of chords is 3 consecutive chords in the cycles of 4ths.

other combinations of major M, minor m, diminished d and augmented aug are

We may start with a sad triad of chords and end with a happy one shifting by an interval of 3rd or even with the same roots but changing the type of the chord.

Other example is the next scale of chords

Nevertheless we can alter that specification of the chords in which case more than one scale are produced:


Or we may alternate minor major once at odd chords and once at even chords e.g.


Other simpler scales from chords are of 4 only chords e.g.

or they can be based on wheel by 3rds and alternating minor major relative chords
e.g.

Such constant alternating patterns of chord relations somehow determine also that the melodic themes (either within a single chord or within a chord transition), are structured and translated or inverted or expanded with similarly alternating intervals of 2nd, 3rd or 4th/5th.

THE GENERAL PATTERN OF A CHROMATIC DOUBLE SCALE OF CHORDS

Of course the less total number of different chords that we may use is better and it sounds more familiar if such chords belong to an harmonic personality (diatonic or harmonic minor or double harmonic minor etc).We may use either minor or major chords.

When playing the scale as progression X1->Y1->X2->Y2->... it is equivalent with having a triple alternation of chord relation and  transitions of the chromatic-melodic   , chromatic-harmonic,  melodic-harmonic,  chromatic-chromatic, melodic-melodic or harmonic-harmonic relations and a third which is variable.

Such constant alternating patterns of chord relations somehow determine also that the melodic themes (either within a single chord or within a chord transition), are structured and translated or inverted or expanded with similarly alternating intervals of 2nd, 3rd or 4th/5th.

Now when we want to improvise based on such a scale of chords (harmony first), we may start with one such chord from this scale and play a melodic theme that fits it. Then we move to the next melodic theme, with all the know so far rules of good melody composition (e.g. variations of translation, inversion, homeomorphism) and try to fit it also to one of the chords of the previous scale of chords. If we succeed in this we repeat it , with the next melodic theme, and appropriate chord from this set of chords or scale of chords, and so on. In this way we have an inter play with harmony and melody at the very process of improvisation or composition.

Here is a way when the scale of chords is identical with the chords of diatonic scale of notes.


An relatively easy and safe way to produce such  mesmerizing  monotone but beautiful flows of improvisation , is to use scale of chords as in post 148. And in particular a very familiar  scale of chords that are the chords of diatonic scale:

and in addition to an instrument tuned by the harmonic tuning (see post 90) so that there is a densest possible opportunity of major or minor chords per number of frets.

2) Walk in the relative chords order up and down

5) Walk in the 4-notes chords (major 7nth extension of the chords) up and down, all then only even then only odd

6) Walk in a half scale (in the chromatic order) up down then other half  up and down. 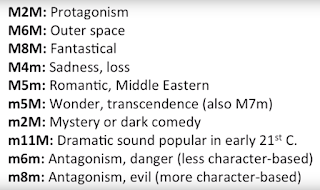 Posted by Dr Costas Kyritsis at 12:31 AM

Email ThisBlogThis!Share to TwitterShare to FacebookShare to Pinterest
Labels: 148. IMPROVISATION AND COMPOSITION METHODS: SCALE OF CHORDS VERSUS CHORD-PROGRESSION

147. The sub-scale closure of 3 or 4 notes chord, and its role in melody improvisation.

In the post 103 we introduced a 7-notes scale, from each 3 or 4-notes chord of  chord progression. See also post 83 about scales of chords versus chords of a scale.

Posted by Dr Costas Kyritsis at 4:56 AM

Email ThisBlogThis!Share to TwitterShare to FacebookShare to Pinterest
Labels: 147. The sub-scale closure of 3 or 4 notes chord and its role in melody improvisation.

146. THE EFFECT OF SINGING OR WHISTLING THE IMPROVISED MELODY.

Therefore it is highly recommended to sing your improvised solos!

Actually one may say that he knows how to improvise when he knows how to whistle over a  background with a chord progression and even an already existing different melody (something abundant to find in youtube).

Here is a relevant video.